We’ll Leave Your Home Safer Than We Found It

The Secret Hazard In Your Walls 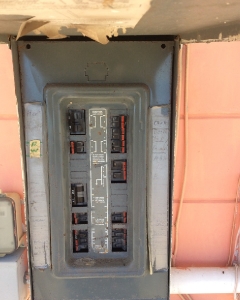 At one time, Federal Pacific Electric Company (FPE) was the biggest name in electrical panels and considered the gold standard of the industry. Millions of homes across the US have Federal Pacific breaker boxes, the vast majority of them built between 1950 and 1980.

However, as time has passed, electricians and home inspectors have noticed a worrying trend—Federal Pacific circuit breakers stop working as they get older. The panel will appear fine for years, even decades, before suddenly failing. And that failure can prove disastrous for your family.

Just one power surge during a thunderstorm could cause your breakers to overheat and combust, creating choking smoke and deadly fumes.

In fact, in 2005 Federal Pacific was sued by a group of New Jersey families who had experienced fires due to failed circuit panels, and the court found them guilty of having “violated the Consumer Fraud Act because FPE knowingly and purposefully distributed circuit breakers which were not tested to meet UL standards.” Federal Pacific had to pay damages to the families who had experienced property damage and loss from their faulty products.

If your home has one of these potentially dangerous electrical panels, contact Mister Sparky to schedule a panel inspection right away.

Special Offers That Recharge Your Wallet

Check out our local specials to see how
you can save time and money.

View Specials
Don't Put Up With
Any Malarky!

If you're in need of electrical services,
play it safe and leave it to the certified
professionals at Mister Sparky.

Learn More About Us
/